The Biggest Little-Known Crime Against Humanity

One of the biggest crimes happened almost as soon as Christianity started.

Before they even got a smidgeon of power, early Christians were already burning books and libraries.

It happened so fast, they even bragged about it in the book they hadn’t finished writing yet (Acts of the Apostles.)

“Many of them also which used curious arts brought their books together and burned them before all men and they counted the price of them and found it fifty thousand pieces of silver. So mightily grew the word of God and prevailed.”   Acts 19:19-20

“Curious Acts” may have included science, medicine, steam power, and math that was all destroyed and had to be “re-invented” 1200-1900 years later.

“The Emperor Constantine ordered the burning of works by those who disputed the Trinity. The Christian Emperor Jovian burned the library of Antioch in 364 AD, because it had been stocked largely by Emperor Julian who was non-Christian; and in 392 AD, the library at Alexandria was looted and burned by Christian mobs and the woman philosopher Hypatia murdered.” 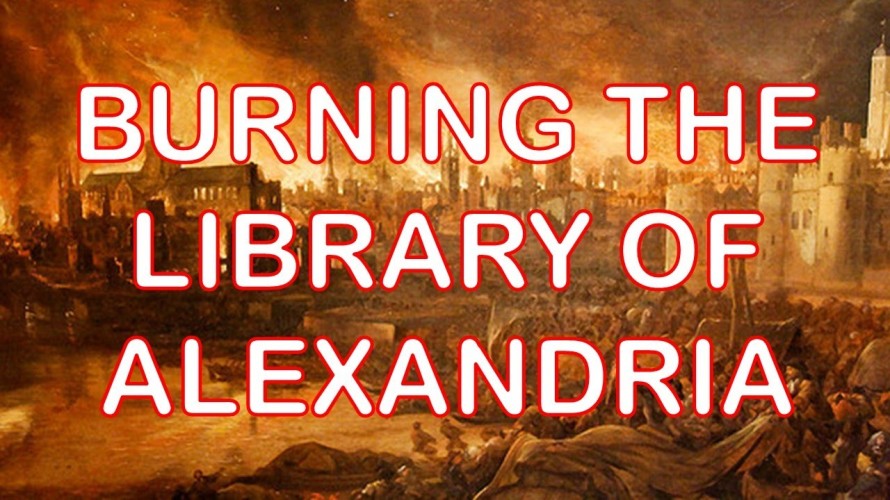 So the eggheads lost a few of their precious publications 1700 years ago… who gives a fuck?

This was before the printing press.  All that knowledge had to be copied by hand.  It included public health, sanitation, healthy diets, and herbal medicines (which may have been better than many modern medicines).

Romans had a life expectancy like ours.  Imagine if that had been preserved and improved upon from 400 AD to now. Millinenials could have been douchebags well into their 50’s — we would have been healthy and strong well past 100.

When Romans shit, running water carried their crap far away.  They didn’t die from diarrhea.

But the Christians destroyed the knowledge of how to build those systems. They shit in pots and just dumped them in the streets.    Soon the bacteria caught up, and the people shit themselves to death in huge numbers (cholera, dysentery) — especially young children and old people.

The Romans had such sophisticated surgical tools, they could remove cataracts and do other difficult procedures.   300 years later, the Christians could only give the blind a dog and pray for them to die soon.

To do those surgeries, the Romans had drugs and anesthesia.  Imagine the thousands of years of suffering and millions of people who would not have faced daily excruxiating pain.

Nope, God says burn those books.  You can pray the pain away. Ever try that?  It doesn’t fucking work.

Don’t give me that “prayer studies” crap.  People only feel better when they believe many people are praying for them — can you say plecebo effect?  They could be calling upon the power of “the toaster”, and it would have the same benefits.

And it wasn’t just the Greek/Roman/Persian/Egyptian knowledge of thousands of years the Christians destroyed.  They loved burning books so much they keep doing it for another 1400 years and burned the knowledge of the Mayans, the Incas and other civilizations too.

Christian apologists are quick to point out that other factors led to lost civilizations and knowledge.  True — but having the priest burn all the books is like Tesla throwing a second engine in the electric car. It’s going to go a lot fucking faster.

Sure, sure the Christians say “other religions” burn books and destory libraries too.  True. Islam especially.  But the key phrase is “religions”.  (And I’ll include the Marxist, Maoist doctrines too — they had similar nonsensical, anti-intellectual creeds).

Without all that bullshit, maybe our hard-won knowledge would last longer. Instead of having to reinvent surgery, public health, medicine and the scientific method we could have kept improving.

If we would have skipped church and read a book, we would have cured knee pain and back pain long ago. I could be sitting up straight and walking right. But NOOO.. I’m leaning and limping like the homeless.

And I’m considered a “healthy” individual.  Imagine what we could have done for the ill. By now, we would have solved Alzheimers, beaten heart disease and cured fucking cancer.

We would have figured out replacement parts, transplants and birth defects long ago.

That’s just healthcare.  If we had an extra 2000 years what could we have done with computing, agriculture and transportation…

I could have been George Fucking Jetson by now.

Any time I get sick of this god forsaken hell of a 110-degree desert, I’d lay down in my solar powered personal helicopter to fly out to the beach —  where the water is clean because we would have solved pollution from plastics by 1400 AD.

Every time I think about what we have lost — and why we lost it — over a series of bullshit stories about acting like “lambs” for a non-exisent god and sacrificing goats for fuck’s sake, I just want to punch a priest in the face.  But I don’t.

I just type out these rants and hope people realize how dangerous and damaging it is for the rest of us when superstition and “faith” are elevated over what is provable and real.

The natural conclusion of living by “faith” in some Sky Daddy is committing these kinds of crimes against humanity.

The worst part is that most of us don’t know a thing about it.