Throwback Thursday:  While I’m in the mood to bitch about water-wasters in a drought, here’s a little reminder that my other attempts to be a decent human being have failed miserably…

Every time I try to do something good for the planet, I get screwed.

In 2007, I bought a natural gas Honda Civic — zero emissions, got a tax break and got to drive in the HOV lane during rush hour.  Awesome.

But it only held the equivalent of 8 gallons. I could only fill it behind the Waste Management dump, 20 miles east of my house — or at the airport, 25 miles west of my house.

Worse, at 60,000 miles, the radiator had a “metallurgy failure” like it was the fucking space shuttle. Cracked the engine block.  They replaced it with the exact same mix of metals, so at 100,000 miles that radiator was out of warranty and due to crack a block —  again.  I had to get rid of it. Fucked for the first time.

Replaced the natural gas lemon with the Lying Nazi Bullshit Diesel. It was supposed to be “clean diesel.” But like clean coal that was all bullshit. VW installed software to fake the emissions test.

Lewis Black knows the other side of the VW story:

In theory it could run on bio-diesel or the french fry drippings from McDonald’s — but that never happened. I ended up filling it on the side of I-10 at the truck stops, because it needed “fresh” diesel or the mold from old tanks would clog the fuel injectors. I’m getting rid of that Lying Nazi Bastard this month. Fucked Again.

So three weeks ago my electric hot water heater just stops working. It’s just me in this little condo. My brother, the organic fruit “plantation” owner switched to “tankless” water heaters years ago when he put solar panels all over his house and “barns”.

“It’s instant hot water,” the former Peace Corp volunteer said. “They use a hell of a lot less power. Other hot water tanks heat 40 gallons of water every day. But tankless only run when you need hot water. Everybody should have one if they care about our future as a species.”

He may not have said those exact words, but whatever he said was full of that persuasive bullshit that mixes a little bit of facts with a shit ton of guilt.

Looked online. Lowes had tankless water heaters for slightly more than a 40-gallon tank. Bought it, and they said it would take 4 days to deliver. I can do 4 days of cold showers… it’s 100 degrees outside, just stand out there for 10 minutes before and after, you will be fine.

I called to get it installed.

“Ohh we don’t install those,” said the guy from Lowes. Fuck.

Contractors “One” and “Two”

Looked for contractors to install tankless, finally found one online — a fully qualified plumber. He comes out and looks it over.

“Your electrical is all wrong, you need at least 60 amps for this tank and you only have 30.” Fuck.

While he takes out the old tank for $200, I take back the Lowes tankless, run to Home Depot and get one with 30 amps.

“Sorry, this is only a booster. It is meant to go next to the sink or shower if you just need a boost of hot water.” contractor “One” said. “You can’t use it for the whole house.”

It’s not a whole fucking house, it’s an 800-square foot condo. The 2 showers are 4 steps away from the hot water heater in either direction. Nope that shit won’t fly.

So contractor “One” leaves, I take back the useless “booster”. Another week of cold showers. Now it’s dipping below 80 degrees outside at night and in the morning when I shower. Getting a little less fun to shiver all over twice a day.

“Just replace it with a regular hot water heater, it would have been done by now,” the wife said. She used the “tone” that makes me feel like I’m in 7th grade and sitting in the Sister Dorothy’s office for smacking “Timmy the weasel” in the head — again. That tone would make the balls of a rhino shrivel.

OK, I buck up my balls, start the search and find an electrician — contractor “Two”.

“Two” comes out the following week. I buy a tankless heater for the whole house at Home Depot for $400. Says it needs a 240 line, double 40 amp connection. “Two” puts in a double 40-amp connection. 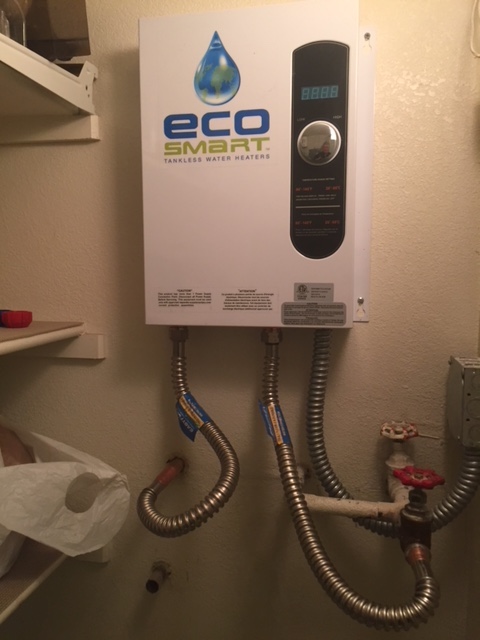 He opens the box, attaches the tankless to the wall and connects the electrical.

“Two” has to come back the next day to put in the second wire. Another day of cold showers.

Get the electrical done — 5 hours of work over two days and several different breakers and wires. $400. Fucked again.

Call Contractor “One” back to install. He makes it that afternoon.

“Hey there’s water already in this.” One says. Two had hooked up the water to “test” it when he ran the electrical… apparently, I didn’t “need” “One” (the plumber) the second time.

So “One” trims out the water lines and adds new flex pipe. “This should last a lot longer than just connecting the 30-year old pipe you had.” $150. Fucked again.

I hope you fuckers, your children and your descendants appreciate what I am doing to burn cleaner shit in my cars and use less juice for my showers… because it was almost 3 weeks and $1200 bucks before I’m finally back in hot water.

And yes, you got it. I am totally Fucked Again.

Guess what mother fuckers? That little insta-heater works so well, the wife came to Tucson and told me we should get them installed in Gilbert. Holy fucking shit — my second “win” in 31 years of marriage…