My Bear is Your T-rex

I created The Bear moniker last year just for this Bullshit blog, but for years my wife has had a much crueler nickname: T-Rex.

She became a giant dinosaur after she went cycling with me for the second time. The first time was in Santa Fe, and she broke her wrist. The orthopedic surgeon described the bone as “dust” and put in a long plate.

After a year or so, the wrist was better and she tried to ride with me again. 15 miles no problem. In the last 100 yards, she bumped the curb, went over and shattered her right shoulder.

Another big plate, and 7 or 8 screws to hold it in place. Unlike the wrist, the shoulder will never completely heal. The second accident was about 6 years ago, and she still can’t lift that arm over her head.

So, the other 6th grade teachers who call themselves the “bitches” (when they are out of ear-shot of the kids) started calling her T-rex. And they did that in right in front of those little fuckers. So the kids call her T-rex and bring her T-rex shit.

She could have gotten all butt-hurt and berated the kids for being the cruel, ignorant assholes we all know kids to be. Instead, she has T-rex dolls all over her desk. There are T-rex posters in her room. She has a closet full of T-rex, T-shirts.

But that crap can’t compare to Halloween. She bought one of those 8-foot, T-rex blow up costumes that people do weird shit in on the internet.

The Boy borrowed the T-rex blowup and won $2000 in a costume contest at a Scottsdale bar. You know what else he did? Put a big fucking hole in the side of it — douchebag millennial.

So the Bear bought another T-rex outfit.

#REDforEd decides to have a protest, and the Bear jumps into her T-rex outfit, and comes up with her sign: (in case you can’t read it in the picture) “Pay teachers more or they will go extinct.”

She stood outside for a couple of hours in 90-degree heat inside a 130-degree costume. She could have peed her pants, and no one could tell because they were already soaked in sweat. Yeah sure, she might be peeing right now is this picture — you will never know. 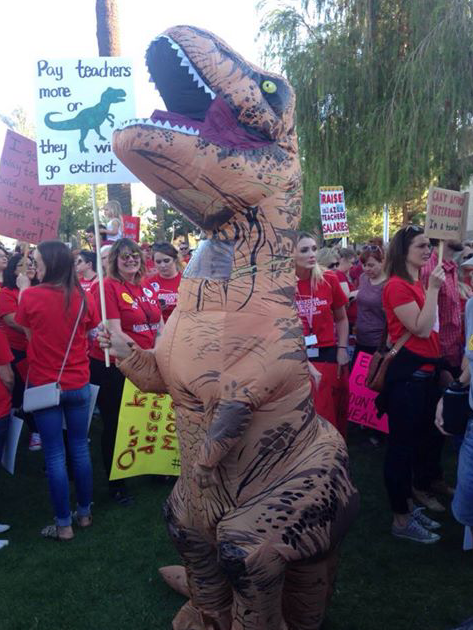 Arizona is short almost 3000 qualified teachers, and they keep lowering the “qualified” standard.. Since 1995, Arizona has lowered the bar from master’s degree, to bachelor’s and now only a few years of college.

At this rate, next year’s standard will be “demonstrate you learned a keg-stand at college. Congratulations, you can teach high school physics.”

The Bear has been teaching for 30-plus years and has a master’s degree and a shit-ton of other credientials. She retired 2 years ago — we had 3 retirement parties. But minutes before the “first” party, she told me she is going back to work. “I don’t know what else I would do… I really like those little fucking brats.”

I wanted to make a sign for her retirement parties: “This is Bullshit.” but I just sat in the corner and sulked — all 3 times.

But after 32 years of teaching, she is finally getting paid. She is drawing her retirement, and a salary. She used to think double-dipping was “immoral.” That it wasn’t right for a retiree to take a job from a younger teacher. And she still worries about it.

She’s finally making what a 25-year-old insurance salesperson or newbie software engineer would make. She just had to spend a hell of a lot more in tuition and work 3 decades to do it.

She says she only spends about $200 a month on her classroom (out of her own money) just on supplies and candy and shit.

But I think it’s a lot more. I really don’t want to know the exact amount. I just know when she goes to any store, only half of it comes in the house. The other half goes to her classroom.

And she’s not the only one. Lots of teachers are doing the same thing and have been doing it for years. They all deserve better.

To me, she’s The Bear, but to you, she should be a Goddamn Dinosaur Superhero.

PS: And don’t you fucking forget it when it comes time to vote.

It’s too late to help my little short-armed T-rex, but a small tax increase now, could pay younger teachers a living wage and do a hell of a lot more for the kids in this state.