I have never trusted birds — they just mock us with their ability to swoop down on our heads.  But years ago something happened that changed my mind.

The Boy was young, and the Bear had just switched from a decade of teaching smart-ass 6th graders to 1st graders — those adorable little shits still love their teachers.  Being with me for 7 years, she needed a few years of  “love.”

Early that school year, one little shit brought in something just fallen out of the nest.  In a moment of weakness, she agreed “to save it.”

Have you ever seen a baby pigeon?  I guaran-fucking-tee you have not.

It was all lean with crepe-like skin — a miniature crypt-keeper.  Parts are covered in  “pin feathers” that are molted and sticking out unevenly —  more like hair on a tarantula than feathers.

When it cried out for food it sounded like the undead calling out for brains. When it stood on its knobby legs and clawed feet, the first reaction was to step back in horror.

“What the fuck is that?” 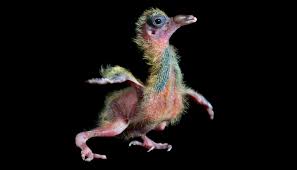 The second impulse was to go find a baseball bat.  Best to see if you can hit a screaming line drive over the backyard fence and erase that vision from your memory forever.  Then throw that bat out, so you don’t have to deal with cleaning off whatever remnants may have worked their way into the wood.

Our Golden Retriever,  forced by the instinct of hundreds of years of breeding to find wounded birds and gently cradle them in its mouth, was afraid of this fucking 2 ounces of tangled evil and shriveled skin.  That dog fled the room and hid under the bed.

Then came the bad news.

We needed to buy a crate to keep it in.   And we needed to feed it by hand (using a syringe to force this goop that had the consistency, color and smell of Taco Bell diarrhea down its gullet).

We seriously talked about just stepping on it — ending this nightmare with one small step for man.

She hauled it back and forth to school every day.  We fed it every night.  We “cleaned” the shit out of the crate twice a day. The kids named it “Iris la Bonga” after the world’s greatest spy in one of their books.

After a few weeks, it walked.  After a few months it pranced.  One day the “hair”  was gone. Replaced by the gray slick and smooth feathers and a shiny almost beautiful necklace of elegant greens and blues and purple. 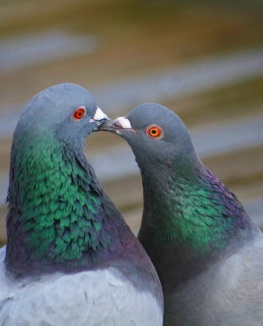 One Saturday it flew up to the tree, and then on top of our house. We quickly stepped inside and closed the door.

Two minutes later, it was scratching at the back door and walked into the house like it owned the place.  Fuck.

Sunday it came in through the doggie door and bounced up on the couch like it was going to watch football with me. Double Fuck.

Monday, was “born free” day at school.  They released Iris at the far end of the playground and watched it fly into the trees with the other birds.  Then the kids slowly moved back to the classroom.  Iris flew over their heads and beat them to the door.

The next time they ran back to the room.  The fucking bird was there first.

So the kids stayed in the room. The Bear released Iris, ran back to the room, and slammed the door.  The kids were quiet — they ignored the scratches until it stopped.

About 10 minutes later there was screaming and crying outside.  A third grader was walking to the bathroom when Iris swooped down, landed on his head and pushed him aside to get in the door. That kid’s PTSD will never be cured.

For the next 30 minutes, Iris was dive bombing other kids and adults looking for a way to get back “home”.  The Bear had to open her classroom door and let Iris in the crate.

After a ton of phone calls, she found out the Phoenix Zoo would take Iris.  They actually  wanted pigeons that would interact with children.

Iris joined the crowd of pigeons at the zoo entry, found all the feed on the ground and never look back.

But every time I think about Iris or see its shit-filled dove cousins cover our parked car with multi-colored stains, I consider going to Walmart and buying a pellet gun and recruiting two feral cats.

Then I could spend Saturdays reenacting the “Great Marianas Turkey Shoot” in the backyard.  I’d gun down these fucking flying rats to face their fate with those feral cats.

After raising one of these assholes by hand, it’s no longer just a matter of distrust — I pretty much hate all of these useless, disgusting, ungrateful, flying mother fuckers.