I May Have Assaulted a Douchebag Millennial — Allegedly

If you see me being led away in handcuffs anytime soon, it was just life teaching me another little lesson about me.

Here’s my side of the story.

We were sucking back the last pitcher of swill in the Third World bar.  One of the FNG‘s, an obvious douchebag millennial who is leaving to get a Master’s degree at UCLA, made an executive decision to get one last “extra” pitcher.

So I had a little more swill than my liver is accustomed to.

We talked about who’s better at singles or doubles.  Three years ago, I hit the age when my knees no longer support singles.

“I still think of myself as a singles player,” I said.

They know I can barely play doubles.

I could feel the age creep into my joints.  My mind still can’t accept that I will never jump again.  This realization is harder to take than hitting any particular number with “age.”  40-50-60 doesn’t mean shit.  Not being able to play singles, means you have joined the aged and the lame. (But I still say, suck it Pickle Ball.  I’m not dead yet).

We started talking about going to John Newcombe tennis ranch — it’s the annual trip to Newks in October. Larry Ward, the lawyer, for fuck’s sake, was making the pro argument.

“You get to play tennis and drink with your friends for four days — and you get to shake John Newcome’s hand and meet Rod Laver.”

“Who,” the douchebag said, disrepecting all we hold dear in tennis history. 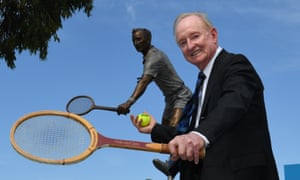 Rod Laver outside his stadium.

Nevermind they named a stadium after Laver in Australia.

“Ok let, me put it in a generation you could understand,” Larry said.  “What if they got John McEnroe or Nastase?”

“Who,” the douchebag said.

Larry threw out 3 or 4 other names.

Fucking little douchebag.  He went to Yale.  Can’t he fucking read or watch the replays on Tennis Channel.  Trying to lord it over us with his youth and his fully functioning liver.  Fuck this guy.  I’m done with this conversation.

“Old… you guys are really, really old,” the douchebag said, as he threw back his head in the most snide and “superior” way possible.

I got up to get my wallet.  The millennial was right next to me and got up at the same time.

A little “funny” thought flashed through my mind. I’ll just give him a little bump, to let him know we might be old, but we are not dead. This isn’t Pickle Ball son… 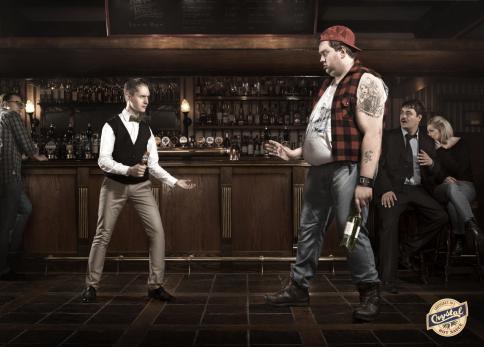 Like most humanes I’ve got at least 75 pounds on him.  So I tried to just put my left shoulder in his shoulder and knock him off step.  Then I was going to say something funny like:

“If you want to keep up with these old men, the weight room is right over there…”

But the douchebag, probably figuring I was just staggering from the swill, took a quick little half step to get in front of me.  There was no way I was going to “catch up” to his feet.

Holy shit.  There was a loud thud as the fatty party of my forearm hit him square in the sternum.

“Ohhh shit” went up from the dudes at the table.  And the douchebag staggered back a couple of steps into the table behind.

I instantly felt awful.  My angry bullshit might fill this blog, but I just wanted to give him a little bump.

I could feel his ribs give, and it forced an exhale.  He pulled in a quick breath.  I didn’t have a funny line to follow that.  I just stepped to my bag and got my wallet and apolgozied.

“That was way over the top,” I said.  “I was just going to give you a little bump.” And then I said, “I’m sorry” like a fucking Canadian.

I don’t remember if the douchebag said anything.  But to his credit he didn’t get all butt hurt or cry like I imagine most millennials would.  He’s a smart ass little guy from Long Island.  He’s probably used to people giving him a “shot” when he runs his mouth too much.

I think we are both over this little bump.

Apparently,  I’m not over being “old” — if you talk shit about age in front of me, I might assault you — you know, just for fun.