The Most Amazing Thing I Ever Saw (in a grocery store)

I typed this out in 2018 – but I could have written it this week. Despite the pandemic, wars in Europe… the happiest stories remain the same.

I was taking my paper bag (I know I hate this fucking planet) and leaving Trader Joe’s, when I saw it.

Holy fuck. A guy was drinking a beer in the checkout line. He had a half-finished six pack at the register. His wife or girlfriend was loading the groceries. No one said shit.

He had a smile on his face like he was getting a blow-job below the counter.

I’ve been on this planet for more than half a century, and I never thought about just walking over to the beer cooler and popping them open while I was in the fucking store.

Wait, that’s not true. When I was 15 and working in the Star Market in the half-ghetto in Akron, Ohio, the winos drank in the store. The first week of the month, they would get their government checks, bring our store’s stolen shopping carts out of their backyards, and fill them with 8-packs of Rolling Rock beer. 8 beers for $3.

At least one of the 8-packs would be down to 6 at checkout. I never saw any of them drink, but it was my job to round up all the empties out of the various isles (for some fucking reason I’ll never understand, most of the empties were left in the baby food isle).

I just checked the urban dictionary, and it said a “wineo” is a person who prefers “fine wine”. So, for you douchebag millennials, I’ll paint the picture of a wino from the 1970’s. (God knows you dip shits don’t know the difference an “e” makes).

Most winos were male, thin, and wore ragged clothes that may have been miscellaneous parts of a businessman’s suit from 20 years before:

From what I guess, most were not “homeless.” They didn’t hang around the store and beg. We had our share of those too. The winos wandered in from the low-cost housing in the neighborhood. They rolled out with our carts full of Rolling Rock before we could run them down or the rent-a-cop kicked them out.

So sure, I guess I thought about drinking while shopping, but I didn’t ever want to cast myself as “the dirty wino”. When the Bear drags me out it’s more like whining and shopping. I sound like an 8-year-old girl: “When is this going to be ovvveeerrrr?”

But the guy I saw in Trader Joe’s looked like a regular married guy with a fucking job. So maybe the rules have changed, and drinking and shopping won’t get you harassed by the police?

This is gonna make Safeway a hell of a lot more fun. 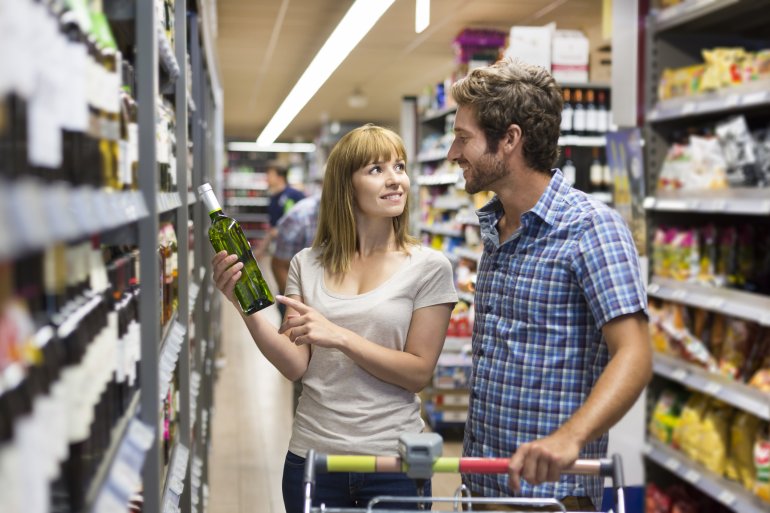 “Keep shopping honey, I’ve got 3 beers left before we can go.”

They have already added beer to the “moving picture show/theater” (fuck you Netflix).

They say retail is dying. Maybe the way to save retail is to combine it with beer and other booze (fuck you Jeff Bezos and your Amazon shopping drones).

Let’s mix alcohol with every kind of shopping you can imagine.

I might actually go clothes shopping with the wife if I could sit in the corner and drink beer. Get me drunk enough, I might even try some shit on.

Shoes. Holy fuck. I would go watch the wife shop for her shoes, if I could get 3-sheets to the wind by noon.

Or those little “gift shops” full of fucking useless trinkets that just seem to follow me around every time we travel. You know most people spend more time in the Grand Canyon Gift Shop than looking at the Grand Fucking Canyon. If we add booze in the gift shop, no one will bother to look over the rim at “God’s” giant hole (but that’s another fucked-up story).

Hey, we could all go to Walmart, have a few beers or belts of vodka and buy an AR-15 or two with the Pancho Villa ammo belt special…

OK, maybe not every kind of shopping you can imagine… but most of it, most of it.

Next week I’m going to be the guy at Trader Joe’s with a beer in my hand and a blow-job smile on my face.