I thought it was “hot” outside when we had “Thanks-grilling“, until the Bear decided we should do a Savage Shrimp Boil in early September.

It was only 105 outside, so a great time to fire up the propane burners and bring 5 gallons of water to a roiling boil in the backyard.

The House Elf (my mother-in-law) was turning 90, so every Savage great and small made the trip. Her birthday; her choice of food, and the Elf wanted shrimp.

We had boiled shrimp for these Savages before — it was a bit of a disaster.

The cheap ass burner kept prematurely ending. Who knew that unlabeled “dial” was a timer that shut off the gas every 3 minutes like we are timing an egg or making a baby?

Then we couldn’t fish the handle out of the mass of boiling water and food to lift the strainer out of the scalding pot.

So not all the food came out at the same time and not all of it was completely cooked. Some people had to go fish the leftover shrimp straight out of the boiling pot, because they all fell out of the strainer.

But the House Elf decided she loved the shrimp and potatoes and corn all stewed in Frank’s red hot sauce and a “bag” of spice. 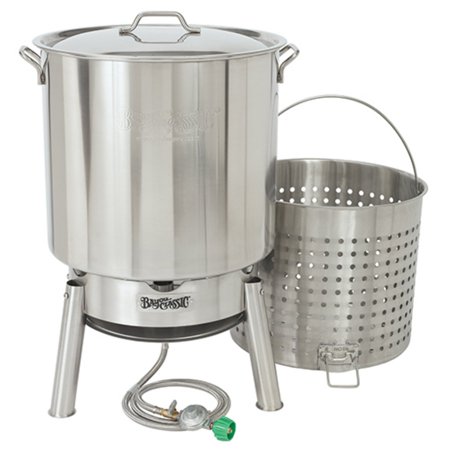 Weeks ahead of time, the Bear ordered a second boiling pot. Bigger and better than the first.

Savage “dinner” parties usually start at noon. But there wasn’t enough room in the house for all 30 of these damn Savages. The Bear moved it to 5 pm, so they could eat in the shade. Finally a slight slip of sanity in this family. Two Savages backed out because the party was “too late.” (Jesus Fucking Christ with these people.)

At least the temperature was down 2 degrees, and most of the yard was out of the sun. So it was only 103 when we lit up the gas.

The Bear did all the work to shop, set up and get this party started. So my only job was to boil the water, set the timer and throw shit in when my alarms went off every 3-8 minutes. She wrote down a list of time and ingredients in giant print on laminated paper that any idiot could follow.

The pots wouldn’t boil at the same time, and the ingredients had been split perfectly in half. But the new pot is almost twice as big as the old. So I’m guessing how much shit to throw in each pot, and both are at different temperatures.

“There’s going to be one spicy and one bland,” I told the Bear. “I can’t tell you which one will be which. And I have no idea if it will all be cooked.”

Fortunately the margaritas had kicked in. “I don’t care,” she said.

I couldn’t drink beer fast enough to keep up with the sweat. I had soaked through my second towel before the boil was half over.

Every time I leaned over the pot, the beer sweat rolled off my head and the brim of my hat. It rained into the pot with little sizzling sounds and puffs of steam as the 100-degree sweat hit the 220-degree water. I hope Savages like recycled beer in their boil.

The last timer went off. I turned off the gas and went to lift the strainers and carry it into the house. The new pot, no problem. Dumped 10 pounds of food on the kitchen island and headed back out for the second set.

But I never could find the strainer handle in the dark and crowded water in the old pot. After 10 minutes, I was about to give up when the Bear showed up around the corner. “People are waiting,” she said.

I could feel a small crowd gathering around to see if they could fix what this idiot was cooking. Ahh good, let’s stir in a little stress for this last step.

Finally, I pried up part of the strainer above the water line. Junior, who married a Savage, grabbed a vice grip and a hot pad and snatched it out of the scalding water and carefully balanced it all the way to the kitchen without killing anyone or burning himself. That’s right, after 30 years we found a Savage “man” with a useful skill.

After the shrimp, there was cake and sparklers and few good Savage stories set to video. Soon the sun set, the temperature dropped below 100, and that’s when the Savages packed up and went home.

I guess it was no longer hot enough for the Savages to boil.