My little witness-protection friend may have to change his nickname. His “real” name is Ed Vegas — or so he says.

But we know that’s the US Marshal’s office laughing their ass off as they make fake names for each drug lord they turn.

“Ok, we called the first guy Ed Vegas, and the second guy Geno Reno… and they bought it…  ha ha ha…”

Bullshit fans will know him as Angry Ed.  But recently on a Pendejo trip to the LJBTC Community, Ed lost his anger.

Kevin wisked him off to urgent care. Urgent care sent him to the emergency room.  The pulse from his cold, cold heart was down to 41. He was one of the first in line to get a room.  That’s bad shit in the ER.

While Kevin and Ed were gone, the rest of the Pendejos were making plans on Ed’s final resting place. No one wanted to take him home to Tucson and tell his wife.  Better to say he just disappeared.

Everyone would think the Marshalls set him up in another city like Miami or Austin (two towns he has talked about moving to) and changed his name to Bob El Paso or Ted Barstow.

“We could just throw him in the ocean,” someone said.  “Maybe the tiger sharks or the seals will eat him.”

“We could just bury him right here,” someone said pointing to the countless grains of sand in the La Jolla Cove.

“No, no,” I said.  “He will just wash up with the tide and people will ask a lot of questions.  We gotta get rid of the entire body.  Let’s burn him in the fire pit, then we can throw the ashes in the ocean… ”

There were a number of other suggestions, but they came in between shots of tequila, beers, and bottles of wine… I can’t remember the details of the final plan. But it was going to be cheap, and it was going to be quick (no witnesses).

Meanwhile, back in the real world, they moved Ed from the ER to the stroke unit.

“They called Kevin back,” Ed told me later. “And he came walking in, and said, ‘Dude, you’re in the stroke unit. They probably think you are going to die.'”

The problem wasn’t in Ed’s head. It was constant heart burn and upset stomach. It had been going on for days, maybe even weeks.

“They told me I had an ulcer,” Ed said.  “They gave me some tests and then some maalox with an anesthetic.  I felt better, and they told me to leave.”

Did they ever tell him what caused the low heart rate or if it would come back?

With that shit-ton of reassurance, he went back to playing tennis the next day after no alcohol and one little piece of bread. After a couple of hours stumbling around the court, he quit and took a nap.

He may have been confident, but I was pretty sure without a diagnosis, Angry Ed’s heart was just going to stop.  All the pendejos are at the age when cardiologists are “our friends.”

So I checked with one of the docs from work, and without a hint of irony, he said the issue for Ed Vegas was probably the vagus nerve.

Yep, flip a few vowels, and Ed Vegas was done in by his vagus nerve.  That nerve sits in the back of the neck.  If the esophagus swells enough, it could pinch the vagus nerve.  That will slow down the heart and lungs of anyone — even Angry Ed Vegas.

Relieve the pressure and pain, the swelling goes down and what’s left of Ed’s heart comes back on line.

It’s a good theory, but there’s only one way to test it. Stop taking the meds, start eating like shit and drinking like a fish.  Let’s see if the heart slows down again.

Fortunately, Ed left the LJBTC Community to take a business trip to Brazil.  The over/under for breaking the “ulcer diet” was 2 hours after touchdown.

No word on the result of the Brazil trip, but I’m thinking with an ulcer and all this shit on his mind, it’s time for a nickname change. 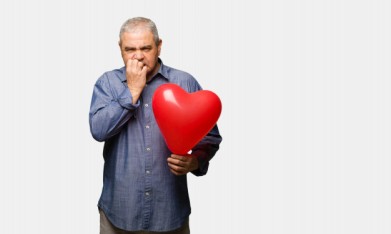 This is not the real “Anxious Ed.”  But close enough.

After Ed returned from Brazil, he saw his Tucson doctor.  Probably not an ulcer for him.

“He said I’m fine,” Ed said as he reached for another beer. “If I had a real ulcer, I would really know — it was probably just a little upset stomach.”

I don’t have a fucking clue about the stomach issues, but any doctor that says Anxious Ed is “fine,” without sending him to a shrink, should have his license pulled.