As a semi-embarrassed member of the Baby Boom, I have to say I really like the expression “OK boomer.” 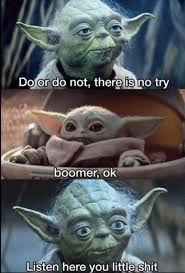 Some people claim it’s a complicated response from milliennials (and Generation Z) to a host of issues like inequality, climate change and student debt.   (If you have an hour to kill you can read all the gory details here.)

All of that could be partially true, but clearly it’s a lazy and quick insult to make a point.

I’m all about lazy and quick insults.

“OK boomer” is a pretty good one.  It definitely sends the signal that our time is coming to an end. My generation has fucked up a lot of shit, and it’s only natural that we fade away.

At least they have an idea that things are fucked up and should change.  They seem to care about what is going to happen — not only to them, but future generations.  Their ideas on work-life balance and the value of their work is closer to how things should be.

They also correctly recognize that boomers as a group are a bunch of selfish assholes, who, like their parents’ generation before them,  are just holding on to their own materialistic shit for as long as they can.

And the “boomer” reaction to “OK boomer” is only making things worse.  It’s not the new “n-word” or ageism.  That’s the kind of PC bullshit that millennials embrace.  We should reject that hyperbolic whining. Calling “HR” because someone without gray hair said “boomer” to you is a fucking terrible idea.

I’m old enough to remember when we said, “OK Grandpa” to the generations before us.  It meant the same damn thing. I still use it on my own friends (ain’t that right, “Grandpa Whinery”?)

All that said, there are a few things boomers have done “right”. Crime is at an all-time low — global poverty is an all-time low.  There are fewer and smaller wars than at any time in recorded history. We have made huge steps in the last 50 years to fight disease, death and poverty around the globe.

In the same way, we are selfish assholes; the millennials are complete douchebags.

They stare at their phones and can’t look you in the eyes.  They want praise and reward for every little thing they do.  They rarely accept responsibility for their own actions. They can’t tolerate different opinions or rational arguments that may not be “politically correct.”

They can’t give a simple yes or no answer, or fucking show up on time.  They are about as reliable as an Italian car.

They complain about student debt while running up their credit card debt on toys, trips and restaurants.  But their worst trait — as a group — they can’t take a fucking joke.

While boomers put off fixing the planet, millennials are putting off growing up as long as possible.

I’ve never heard or seen the “OK boomer” clapback in person, but if I ever do, I hope to remember to answer:  “Grow up douchebag.”

The good news is they eventually will, and the human race will probably be better off for it.

Is that Ok boomer?