I’ve got a lot of sympathy for people forced to live outside. I won’t even go camping. When a homeless person asks for help in the summer, I’m ready to give a few bucks.

Don’t care if they run straight to the meth dealer or the liquor store when it’s 100 or more. Hell, they deserve some kind of relief if they are out in the heat.

But this time of year, most beggars are obviously snowbirds. They flee the cold and ice of where-ever the fuck they are from and “winter” in Tucson. 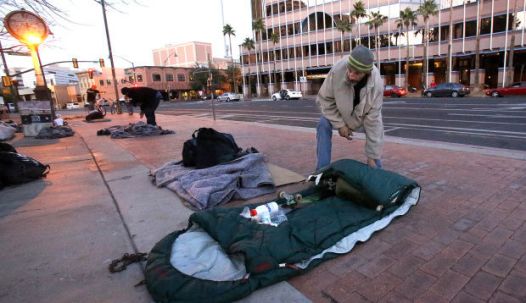 Stole the image from here.

There’s one douchebag millennial that hangs around the restaurants near my office. He’s extremely polite, more than a little overweight, and pretty pale (snowbird giveaway — the local homeless are dark or red from the summer sun). Portly-pale boy always asks for money to “buy something for lunch.”

I’d give if this was August or September. But I’ve seen this kid the last 3 years, and it’s always November-March. Fuck you snowbird.

I’ve been working my whole life to become a snowbird, and I’m still stuck in Tucson all summer. Check that, I have two homes – a winter and summer home if you will. But my fucking summer home is in Tucson. The other one is in Phoenix where it’s even hotter.

I’m not gonna enable your lifestyle of staying where it is always 50-80 degrees. That’s my dream, and I’m going to buy my dream before I contribute to yours. Stick around in the summer, and we’ll talk.

Twenty-five years ago, I learned of this annual migration. We took a family trip to Seattle in June, and stayed near the Space Needle. The weather was perfect — 75, sunny and dry.

The Boy was 3, and like all 3-year-olds on vacation, he got sick. I don’t remember exactly, but some ear, nose and throat shit that needed antibiotics.

We find the closest clinic and walk there. Who knew the Space Needle was in a shitty neighborhood. It was obvious we were the only people in the waiting room who lived indoors.

They were fascinated by us, like we were the first aliens to land on earth.

“Where you folks from?” one tooth-less patient asked.

“Ohh we all know Arizona — that’s where we go in the winter. But it’s too damn hot in the summer.”

The rest chimed in about their favorite spots in Phoenix or Tucson and how it was better than San Diego or LA (all the best spots are already claimed by the year-round homeless in California).

How did they get here?

Some jumped the freight trains (dangerous but free), some had money for a bus (social security or disability), some got a free bus ticket from the city to go to any other city.

This was the 90’s and around that time, Phoenix was caught buying one-way plane tickets to Hawaii to try and make sure the homeless didn’t come back. But Hawaii was buying one-way tickets back to California and Arizona.

Hawaiian Airlines was a fucking revolving door for the homeless “on the go.” Bet you never read about that shit in the in-flight magazine. Do you get to pre-board if you have children or no permanent address?

Yeah, Yeah I know. Most of the homeless have health, or addiction, or mental issues. I’m sure they have had to work harder at survival than I’ve worked at anything my entire life. Many are veterans. They all deserve better.

I’m happy to pay taxes and vote to give more support to all people. I’ll give to charities that help vets and the mentally ill get off the streets.

But these goddamn snowbirds piss me off. If you are some poor guy living outdoors, I’ll buy you a sandwich at Beyond Bread in July.

For me charity begins at 100-degrees.